Andrew Corbet, and Corbet’s Group have been part of the Graham Lusty family for a while now. A fellow Queensland based company, Corbet’s can be found two hours north of Brisbane in the Gympie region.

Carrying all kinds of bulk haulage materials, such as grain, cattle feed and sawdust – Corbet’s need a wide variety of tipper trailers. Over the years, we have built the team sliders, drop deck chassis tippers, Redi-Tip sets, moving floors and dollies to haul their loads.

But no matter the style of trailer, they always feature the red chassis and painted ice white sides. While their trailers are professionally detailed before being delivered, Corbett’s manage to keep them looking slick.

Some of their trailers feature the Alcoa Dura-Bright EVO wheels, which have a surface treatment to withstand tough conditions. According to Alcoa, it acts like a force field around the wheels to help repel dirt – meaning a simple soap down is all they need. 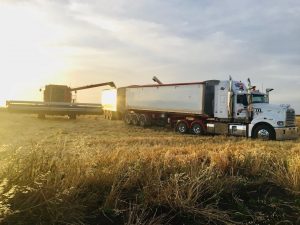 Still looking good while hard at it!

Corbet’s GLT trailers are also used in PBS A-Double combinations. Having worked with PBS combinations since 2013, GLT has a productive working relationship with the NHVR and have a range of PBS approved designs ready to go.